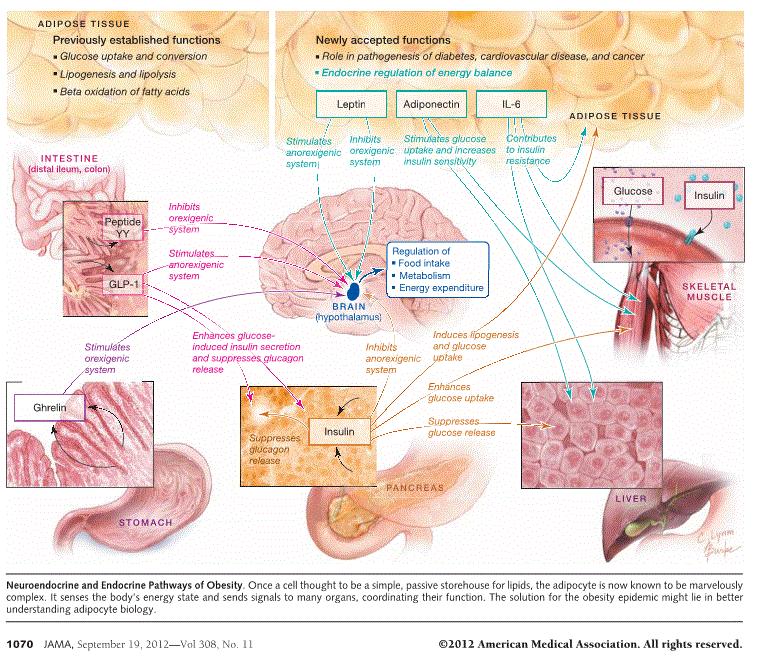 A recent issue of JAMA (Journal of the American Medical Association) is entirely devoted to the issue of Obesity.

My weight loss patients are very intelligent people who might enjoy reading the latest medical journals, but the articles are written for physicians, with medical jargon and esoteric language. So, I thought it would be a nice service if I translated a few of the weight loss articles from medicalspeak into modern English. This is the first “translation”.

The fat cell (adipocyte) initially appears to be simply a storage container. It is difficult to see the nucleus or any other structures in the cell. It’s hard to believe it has important endocrine functions like secretion of hormones. For decades, weight loss investigators and physicians were misled into thinking that fat cells were passive storage containers that simply stored fats (lipids) after meals and released fatty acids during fasting. Over the past decade, we have learned a lot more.

Weight loss researchers now understand the role of the fat cell in the management of glucose after a meal. Weight loss researchers are beginning to better understand the fat cell’s role in fat-creation (lipogenesis), glyceride-creation (glyceroneogenesis), and mitochondrial function. Mitochondria are found in most cells in the body; they look like mini-organs and have multiple functions, a major one of which includes energy-handling.

Fat cells are an important endocrine tissue involved in the regulation of energy balance, as well as in the cause of diabetes, cardiovascular disease, and cancer, due to its ability to store toxins and secrete hormones.

Leptin is one of the most important hormones secreted from fat cells. The amount of leptin secreted is proportionate to the amount of lipids present in the fat cell. More leptin is secreted from women’s fat cells than men’s fat cells. (The next time someone says that there is no difference between men’s fat and women’s fat, please point this out to them. They do not know what they are talking about.) Leptin sends a signal to the brain to inhibit food intake. Therefore, when you are fasting, your leptin levels drop. The low levels of leptin, in turn, tell the brain to increase appetite. When someone is obese, their leptin levels are very high. The problem that many obese individuals face is called “leptin-resistance” in that the brain ignores the message from leptin that the appetite should be turned off.

IL-6 is another protein messenger made by fat cells. IL-6 can directly cause insulin resistance by interfering with insulin receptor functioning. IL-6 is pro-inflammatory.

Ghrelin is secreted by cells in the stomach after fasting and just before meals. After a meal, ghrelin levels decrease. Ghrelin increases appetite by stimulating neurons in the hypothalamus portion of the brain. The hypothalamus plays a very important role in appetite regulation. A group of neurons have been named pro-opiomelanocortin neurons (POMC). These neurons, when stimulated, activate receptors which decrease appetite and regulate insulin levels. Other neurons are named neuropeptide-Y and AgRP neurons. Neuropeptide-Y neurons block the POMC neurons, so they increase the appetite when they are stimulated. Both sets of neurons are targets of leptin and serotonin. A new anti-obesity drug, lorcaserin (Belviq), targets the serotonin receptors including those expressed by POMC neurons. Belviq decreases the appetite.